Del Dal Pra at Count Basie Park, where the stadium’s football pitch was prepared for the installation of a new surface last week. (Photo by John T. Ward. Click to enlarge.)

At the start of his new job as Director of Parks and Recreation at Red Bank, Louis ‘Del’ Dal Pra suspected he would have to make changes that would irritate some people.

Two meetings this spring convinced him that he had no choice. 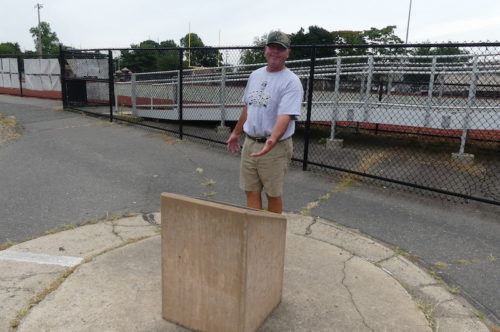 First incident: At the end of April, just days after learning he had won the job, Dal Pra, then sports director at Red Bank Regional High School, stopped to eat ice cream in a nearby town and met a crowd of children and parents celebrating a sporting milestone. The children were dressed in uniforms emblazoned with “Red Bank” and the name of the team.

Dal Pra, his face partially covered in an anti-pandemic mask, asked where they lived in town.

“A mother looked at me and said, ‘Oh no, we are not from Red Bank, we are just using their fields,’” said Dal Pra. rougebancvert. “It was kind of like, ‘Keep it a secret. I think, this lady has no idea who she is talking about.

Dal Pra said he suspected the kids weren’t from Red Bank, “but I didn’t know it was so wide open, someone would say ‘oh we just use them.'”

Second Incident: One night shortly after starting work, Dal Pra was called in about a report of children smoking marijuana in Count Basie Park. He arrived and found eight high school students, “cleats, shin guards, balls in hand” and stinking of the pot, while all around them were ball pitches being used by teams from outside. the city. He asked the children what they were thinking.

“They said, ‘Coach, we have nowhere to go,’” said Dal Pra. “A child looks at me and says, ‘It’s not fair. They get the turf and the lights, and we get the dirt and the darkness.

Although he did not condone the use of the weed, Dal Pra said the incident underscored the adage that idle hands are the devil’s workshop. And he “had to be okay,” he said, that the kids in the borough were making themselves a short time.

“This kid is right,” he said. “The city collects a fee from the travel crews, but is it fair that our children have nowhere to go, when we built this wonderful facility for them? I’m going to be part of the problem, not the solution, if I let this continue, ”he said.

Last month, with the support of the city council, Dal Pra set new priorities for use in the field. Dubbed “Red Bank First,” its directive ends a two-decade period in which the borough’s ball fields were ceded to out-of-town organizations that pay far less than what they pay. they would be billed at nearby private facilities.

The new policy grants the first dibs at Basie Park to teams whose formation is made up entirely of city children: recreation teams from the borough and public schools; Red Bank Football Club, a travel football club that is “100% Red Bank,” said Dal Pra; five youth American football teams (formerly Pop Warner) and others.

Separately, the borough – which leases the facility to the local school district – sublets the stadium football field and baseball fields to Red Bank Catholic High, which helps maintain the capital.

“No one has been kicked out,” Dal Pra said. “However, when I do the planning now, the 100% Red Bank teams come into the field when they want to. “

If land is available, it will offer it to organizations from out of town, with priority given to those with Red Bank representation, he said.

“I’m all for kids to play no matter where they’re from,” Dal Pra told the board at its July workshop session. “But I work for Red Bank, I live at Red Bank and I coach at Red Bank, and that’s why I wanted to take care of our kids first.”

“It was high time that this was implemented, and we all appreciate it,” said Mayor Pasquale Menna.

Dal Pra, 56, has been a resident of the borough for 25 years, a member of the recreation committee for 20 years and a multi-sport coach at the youth and high school levels. As the father of two athletic sons, he also had a parent’s perspective on the operations of the department when he was last held by Charlie Hoffmann, who left to become director of recreation at Rumson in April.

Still, Dal Pra said he only made the changes after reviewing the rosters of the 38 teams that use the facility. Seventeen were football teams, and of those, 10 had no Red Bank players, he said.

“We’re kind of a football town,” he said, but teams from as far away as Freehold and Barnegat are monopolizing the pitches.

He said his predecessors in the post “had done nothing wrong” but that conditions had changed over time to the point where the children of the district were being ousted.

The problem dates back to 2000, when the borough spent $ 300,000 to install field lighting, then sodded fields of worn grass. Travel teams that previously avoided Red Bank have started to fight over training and playing times, Dal Pra said.

Also appealing: Clubs pay Red Bank around $ 50 an hour, compared to $ 200 an hour they might pay at private sports facilities that have popped up in Monmouth County in recent years.

At some point in the past, prior to his arrival, the department began registering teams out of town as “Red Bank” teams: collecting fees and paying each team’s expenses for membership. to the league, umpires and others, said Dal Pra. Contrary to claims by some teams, he said: “Red Bank wasn’t getting anything out of it.”

Dal Pra said he was repelled by travel football and other organizations. Even some parents are not very happy with his decision, he said, “but we have to take this position. I know deep in my heart that we are doing the right thing because no Red Bank child has been affected. It only benefited them.

The policy took effect immediately. For now, the Basie Stadium pitch is closed while a replacement area is being set up under a contract prior to Dal Pra’s hiring.

Further improvements are to come. Dal Pra said he ordered new hoops and candlesticks for the basketball courts on his first day on the job, and the borough is considering applying for a grant to renovate the grandstand. Longer term, Dal Pra said he hopes to formulate a 10 or 15 year plan for the district’s parks and recreation facilities.

He also addressed a pet peeve: seeing the lights on until 10 p.m. at Basie Park, even during pouring rain and snowstorms. He now has an app on his cell phone that allows him to bypass the timer and turn it off.

At the July council session, Dal Pra offered to turn off the lights when no team was scheduled to use the facility, but City Councilor Michael Ballard pushed back, expressing concern over a ” cooling “lights that go out when a parent wants to use the ability to throw a ball with a child.

Dal Pra agreed and said he would leave the lights on except for times when no park user would be expected.

Explained: Why the NCPCR recommended that minority ...